High dimensional data-sets are now pervasive in various signal processing applications. For example, high resolution surveillance cameras are now commonplace generating millions of images continually. A major factor in the success of current generation signal processing algorithms is the fact that, even though these data-sets are high dimensional, their intrinsic dimension is often much smaller than the dimension of the ambient space. 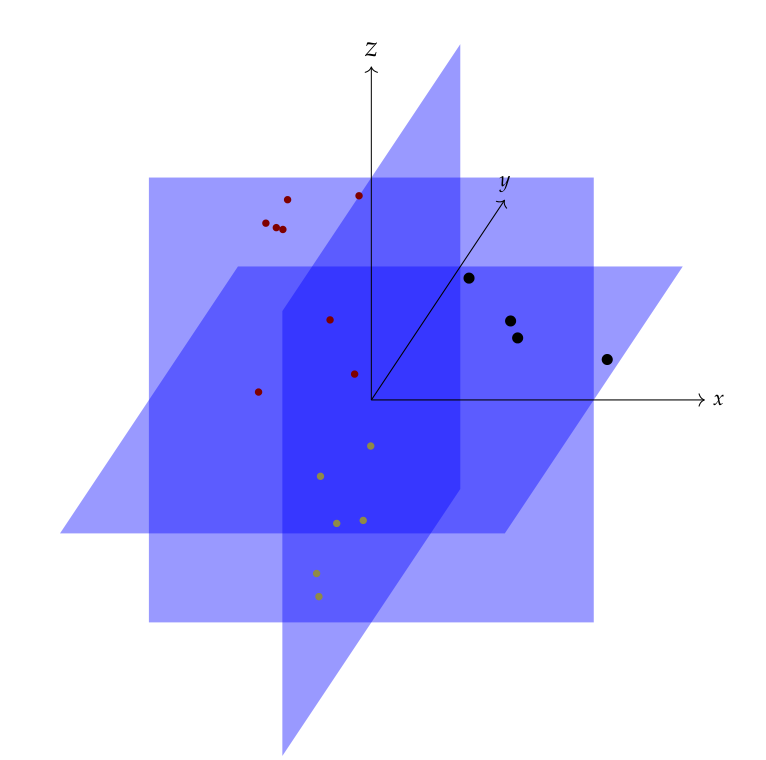 One resorts to inferring (or learning) a quantitative model \(\MM\) of a given set of data points \(\bY = \{ \by_1, \dots, \by_S\} \subset \RR^M\). Such a model enables us to obtain a low dimensional representation of a high dimensional data set. The low dimensional representations enable efficient implementation of acquisition, compression, storage, and various statistical inferencing tasks without losing significant precision. There is no such thing as a perfect model. Rather, we seek a model \(\MM^*\) that is best among a restricted class of models \(\MMM = \{ \MM \}\) which is rich enough to describe the data set to a desired accuracy yet restricted enough so that selecting the best model is tractable.

In absence of training data, the problem of modeling falls into the category of unsupervised learning. There are two common viewpoints of data modeling. A statistical viewpoint assumes that data points are random samples from a probabilistic distribution. Statistical models try to learn the distribution from the dataset. In contrast, a geometrical viewpoint assumes that data points belong to a geometrical object (a smooth manifold or a topological space). A geometrical model attempts to learn the shape of the object to which the data points belong. Examples of statistical modeling include maximum likelihood, maximum a posteriori estimates, Bayesian models etc. An example of geometrical models is Principal Component Analysis (PCA) which assumes that data is drawn from a low dimensional subspace of the high dimensional ambient space. PCA is simple to implement and has found tremendous success in different fields e.g., pattern recognition, data compression, image processing, computer vision, etc. 1.

The assumption that all the data points in a data set could be drawn from a single model however happens to be a stretched one. In practice, it often occurs that if we group or segment the data set \(\bY\) into multiple disjoint subsets: \(\bY = \bY_1 \cup \dots \cup \bY_K\), then each subset can be modeled sufficiently well by a model \(\MM_k^*\) (\(1 \leq k \leq K\)) chosen from a simple model class. Each model \(\MM_k^*\) is called a primitive or component model. In this sense, the data set \(\bY\) is called a mixed dataset and the collection of primitive models is called a hybrid model for the dataset. Let us look at some examples of mixed data sets.

In the Motion segmentation problem, an image sequence consisting of multiple moving objects is segmented so that each segment consists of motion from only one object. This is a fundamental problem in applications such as motion capture, vision based navigation, target tracking and surveillance. We first track the trajectories of feature points (from all objects) over the image sequence. It has been shown (see sec:motion_segmentation) that trajectories of feature points for rigid motion for a single object form a low dimensional subspace. Thus motion segmentation problem can be solved by segmenting the feature point trajectories
for different objects separately and estimating the motion of each object from corresponding trajectories.

In a face clustering problem, we have a collection of unlabeled images of different faces taken under varying illumination conditions. Our goal is to cluster, images of the same face in one group each. For a Lambertian object, it has been shown that the set of images taken under different lighting conditions forms a cone in the image space. This cone can be well approximated by a low-dimensional subspace [5, 49]. The images of the face of each person form one low dimensional subspace and the face clustering problem reduces to clustering the collection of images to multiple subspaces.

As the examples above suggest, a typical hybrid model for a mixed data set consists of multiple primitive models where each primitive is a (low dimensional) subspace. The data set is modeled as being sampled from a collection or arrangement \(\UUU\) of linear (or affine) subspaces \(\UUU_k \subset \RR^M\) : \(\UUU = \{ \UUU_1 , \dots , \UUU_K \}\). The union of the subspaces2 is denoted as \(Z_{\UUU} = \UUU_1 \cup \dots \cup \UUU_K\). This is indeed a geometric model. In such modeling problems, individual subspaces (dimension and orientation of each subspace and total number of subspaces) and the membership of a data point (a single image in the face clustering problem) to a particular subspace is unknown beforehand. This entails the need for algorithms which can simultaneously identify the subspaces involved and cluster/segment the data points from individual subspaces into separate groups. This problem is known as subspace clustering which is the focus of this paper. An earlier detailed introduction to subspace clustering can be found in [83].

An example of a statistical hybrid model is a Gaussian Mixture Model (GMM) where one assumes that the sample points are drawn independently from a mixture of Gaussian distributions. A way of estimating such a mixture model is the expectation maximization (EM) method.

First some general notation for vectors and matrices.

The data set can be modeled as a set of data points lying in a union of low dimensional linear or affine subspaces in a Euclidean space \(\RR^M\) where \(M\) denotes the dimension of ambient space.

This section reviews some useful concepts from linear algebra relevant for the chapter.

A collection of linear subspaces is called disjoint if they are pairwise independent [33]. In other words, every pair of subspaces intersect only at the origin.

For a detailed introduction to affine concepts, see [54].

PCA can also be viewed as a statistical model. When the data points are independent samples drawn from a Gaussian distribution, the geometric formulation of PCA coincides with its statistical formulation.

We would use the terms arrangement and union interchangeably. For more discussion see Algebraic Geometry.